Facade structures are a unique feature in modern building architecture 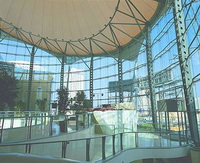 Facade structures supporting structural glass curtain walls are are one of the most distinctive features in a modern building today.

It is the structural systems used in the facades that set them apart from associated building technology the most. It has been the pursuit of transparency in these long-span facade structures that has driven the development of structural systems.

These exposed structures are classified as Strongback, simple support,mast truss, cable truss, glass fin and grid shell. Structural glass know-how is made up of many unique considerations, including diverse techniques, materials and processes with which the designer must have experience.Refer to National Institute of Building Sciences for further details and information. All of the basic structural systems can be used in sloped and overhead applications. More significantly, many of the systems can be used to form complete building enclosures of complex, irregular geometry.

Facade structure systems can be mixed in combinations that open up new possibilities of form and performance, or blended to shape hybrid facade structural systems. 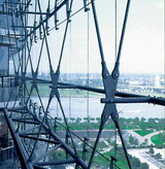 All the structural systems except strongbacks are capable of long spans of thirty meters or more, and while the implications of span vary between the systems, the general rule is that complexity increases with span.

It is important to note that the longer the span the more important the efficiency of the spanning system. Check Center for window & Cladding Tech. for further guidance and info. There are two distinct forms of structure arrangements used in structural glass curtain wall; "closed" and "open" systems.

A structure whose primary stability is achieved internally, without the requirement for pre-tension forces applied against an anchoring boundary structure is considered as closed system.

A structure whose primary stability is achieved only through the application of pre-tension forces applied against an anchoring boundary structure is considered as open system.

The primary feature that differentiates these structural systems, as a function of this arrangement, is the requirement for prestress, which must be determined as a function of the design process and must be realized on site during the installation of the structure. Extreme Loading is a good source to refer to for structural analysis and system optimization. Open systems as mentioned require prestress forces to achieve stability. This complicates the design process sometimes requiring the involvement of a specialist.

Such structures also require pre-tensioning in the field to achieve the prestress requirements, which can complicate the field work, especially depending upon the magnitude of the prestress loads. This criterion is generally not an issue with closed systems.

The structural support systems used in facades range from flexible to very flexible with respect to movement under load. Wind load deflection criteria ranges from span/45 to span/175.

The facade structures are designed to accommodate movements and butt-glazed silicon joint provide remarkable elasticity to the glazing systems.

It is worth to note that highly flexible structures perform better under blast and impact loading; in combination with laminated glass, they are capable of greater and quicker deflections under load, mitigating blast effect.

This is an area where designers are considering currently, when planning and designing a building of distinct importance.

Force, as we know it, is calculated as mass times acceleration, thus weight is a disadvantage with seismic forces, but an advantage in resisting wind loads. The structure types mentioned earlier are usually light enough that maximum loads normally result from wind loads, and should hence be designed for.