Curtain wall failure
and how to prevent it.

In the design of cladding and to avoid curtain wall failure there are three matters of chief concern to be considered by the façade designers :

For the structural integrity of the curtain wall the stiffness rather than the requirement of strength is the primary concern, although anchorage failure due to inadequate strength should be given proper attention.

Providing proper resistance to lateral load is routine procedure, especially in view of the fact that we now know more about the nature of wind loads than we did a decade ago.

The significance of negative wind pressure or suction acting on the wall augmented by the internal building pressure caused by air leakage is well understood, as reflected in most building codes. You could try International Code Council for further info. 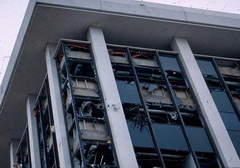 Since the movements manifest themselves at the joints of the cladding, the success of a cladding system lies in the proper detailing of the joints. Provisions must be made to accommodate both the vertical and horizontal movement in the plane of the wall.

Other design considerations such as weather tightness, moisture control, thermal insulation, and sound transmissions are areas normally taken care of by the cladding designer. 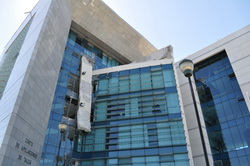 - Structural failure of anchorages resulting in other wall elements disengaging from the building, creating serious hazard to the public.

- Glass breakage, which in many instances has been a safety hazard.

Failure of cladding can arise because of the differential movement both laterally and vertically between the building columns.

Thermal movement, long-term creep of a concrete frame, and foundation settlement also contribute to the failure.