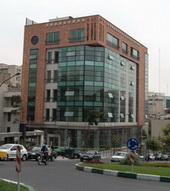 Nowadays, curtain wall system is a major investment in both the construction and the long-term success of the building. Curtain wall system is not just a barrier to the external envelope of buildings, it is crucial to the image and the perception of a building. A good curtain wall design system with excellent performance is essential; otherwise, it will cause large expenditure in future maintenance.

Modernist architects discarded the decorative styles of the 19th century and sought to merge architecture with industry. The result was a simple, logical, functional building style, as much industrial as artistic.Check the Royal Institude of British Architects for more info

The first curtain wall was designed by German Architect Walter Gropius (1883-1969) who was invited to teach at art school in Germany called the Bauhau (“Building House”). When the Bauhaus moved from Weimar to Dessau in 1926. Gropius constructed the new campus according to his philosophy of clean, functional, modern design. Gropius’s most important contribution was the so-called “Curtain Wall”, the exterior wall of glass that also displays the building’s interior design. Gropius became an influential teacher in America and a founder of what has come to be known as the : International Style in Architecture.

The curtain walls nowadays, even the simpler types, are far more sophisticated products than their early counterparts, though many of the earliest walls are still performing admirably. 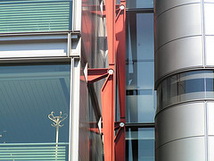 More than fifty years of experience and development have eliminated the major difficulties of the pioneering designs, resulting in better products. Beginning with the relatively simple, but innovative concept of the early 1950’s, a series of window units and panels joined and supported by simple framing members. Curtain wall system technology has developed, over the years, into a proliferation of highly engineered designs.

Throughout this development, however, the basic principles of developing good curtain wall system have not changed. Recognition of these principles has grown with experience, and the criteria of good design have now become well defined. And, as with any vital and developing product, the façade industry continues to find ways of improving performance.

Refer to "Center for window & cladding technology" for technical & design issues. "Facade engineering society" is another site to seek professional status and advice. There is a great diversity of exterior cladding systems. The proper design, installation, and operation of facade in buildings is a culmination of the coordination activities among architects, engineers, cladding manufacturers, glazing contractor, and the building owners.

Glass is by far the most commonly used material for cladding a building and as such requires having certain standard of quality and strength. Glass can be used as a single material in a curtain wall system or in combination with stone or aluminium or brick veneer as well as fibre-reinforced concrete systems to form the desired façade designed by the architect. Some of the most commomly used curtain wall systems are aluminium curtain wall,Brick veneer facade, Glass system, Stone facade, and Glass fiber reinforced concrete system - gfrc, 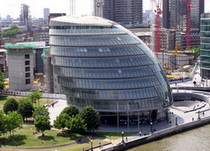 To reduce costs, many designs use a laminated thin-gauge metal sheet bonded to a metal honeycomb backup. Typically, framing employed for mullions is aluminium because of the ease of producing complex custom shapes by extrusion. Click here for info on the use of aluminium in buildings.