In building construction, particularly high rise buildings, curtain wall test is a normal practice. Usually, a full-scale mock-up of proposed cladding system at a special testing facility is put up to evaluate the performance of the system against various environmental elements.

Actual framing, glass, sealants, gaskets, and anchorage devices, are used in an effort to simulate the actual job site conditions. In most cases, the cladding materials for a mock-up are supplied by the individual job supplier under the direction the curtail wall subcontractor. 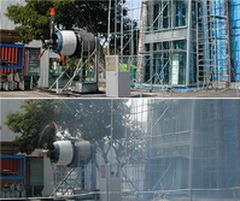 The mock-up is erected by the subcontractor's crew. The crew erects a curtain wall of from one to four stories, which typically forms one side of a four-sided roofed curtain wall test chamber.

The performance characteristics commonly investigated in curtain wall test are:

The structural performance of the cladding system is considered as the critical test to ensure compliance to safety requirements of some building codes. Check the following sites for more details and info., Whole building design guide, Center for window & cladding technology, Facade engineering society.

The governing factor in the structural design of curtain wall framing members and panels is usually the stiffness rather than the strength.

Analytically it is impossible to account for all the interactions that exist in a curtain wall which is comprised of many interdependent such as fastenings, anchors, non rigid joints, sealants, and gaskets.

Physical testing is often the most reliable means of verifying the performance. Useful information can be obtained by loading the specimens to failure to get an insight into the ultimate capacity of the system and to identify its weak spots.

Structural testing is conducted by the static method using an air chamber, subjecting the test specimen to both positive and negative pressures.

Air is blown into the chamber to simulate negative wind loads and sucked out to put on the positive wind loads. A monometer is used to measure the air pressure differential between the outside and inside of the pressure chamber. 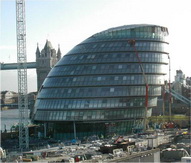 In the dynamic curtain wall test, a propeller is used to create air turbulence to simulate wind blowing water against the curtain wall.

Typically, the structural test consists of positive and negative uniform static design load and proof load of 150 percent of the design load.

Seismic load test is conducted by subjecting the wall to a racking displacement in the plane of the wall equal to the calculated floor to floor lateral displacement and for proof load twice that displacement. Check Institute of structural engineers site for further guidance and info.

Other performance criteria to be considered are:

Gravity loads of cladding systems cause deflections in the horizontal load-carrying members.

Although gravity load itself is a one time load, the members supporting the cladding system are subjected to variable floor and roof live loads, requiring that the connections of the cladding to the frame being designed to provide sufficient relative movement to insure that the placements do not impose vertical loads on the wall itself.

In addition concrete buildings are subjected to creep, compounding the problem of curtain wall test and design.

Temperature creates expansion and contraction of materials in addition to the temperature differential between the interior and exterior sides of the cladding which must be controlled to create a liveable environment within the building.

Sunlight, particularly in the form of ultraviolet rays, produces chemical changes which cause fading and degradation of materials and this effect should be considered at the time of procurement.