With cable truss glass systems the transparency of the façade is improved significantly realizing the architects' desires through the art of structural design and engineering.

If the spreaders were also to be removed a system known as cable net is subsequently achieved. This is also further considered in details below.

Removal of the central compression element causes a fundamental change in the structural behavior of truss, which is no longer stable and incapable of carrying any form of applied loads.

However, if the truss chords are tensioned against an upper and lower boundary element of the building structure, the stability could then be established and preserved. 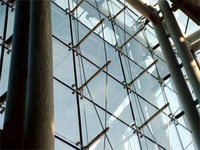 Truss systems comprised of this truss form, can be referred to as open systems as oppose to closed systems where the stability is provided as a function of truss geometry, requiring no interaction from the boundary structure to provide built-in truss stability.

In designing cable truss glass systems, appropriate prestress forces are required to stabilize the truss and control deflections under design loading conditions and must be determined as part of the system design.

These prestress forces must be balanced against the reaction loads that will be transferred to the boundary structure.

The main consideration in the design of an open truss system is to assure that the boundary structure is designed to handle the reaction loads.

It is important to note that the loads generated from the prestress requirements are not irregular loads like wind or seismic loads, but permanent loads like dead loads.

The truss resists imposed loads by both increasing the tension in one catenary curve and a simultaneous reduction of the tension in the opposing chord.

In addition as the truss deflects the changes in angles at nodes generate increasing resistance due to prestress. As a result of this double action the stiffness of a cable truss, with both cables effective, is twice that for a single catenary curve. Extreme Loading Analysis is a good source for modeling & analyzing structural behavior of glass supporting system. 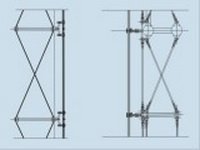 The application of prestress forces is in the field and during installation of the cable truss system. With long-span systems the required prestress forces are achievable only with hydraulic jacking methods, and must include connection detailing carefully developed to support the field pre-tensioning of the system.

Prestress forces can range widely depending upon variables of span, design loading, and geometry, but each configuration of open system geometry will have an optimum prestress value, beyond which no useful improvement in performance results. Refer to "center for window & cladding technology" for technical & design issues. 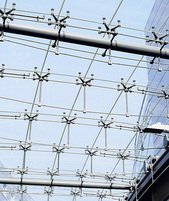 While many cable truss geometries and forms are possible, lens shaped and inverted geometries with horizontal compression struts are most common.

A spider or other fitting type can be positioned at the end of the extended spreader struts to fix the glass.

In pursuit of greater transparency and depth of vision facade designers decided to eliminate the remaining compression elements i.e. the spreader struts in the cable truss glass systems, thus forming a new type of open system structure that is cable based instead of truss based.

Therefore, all that remains from the cable truss facade form are the cable elements, which are typically tensioned vertically against top and bottom boundary structure. If sufficient prestress forces are achieved, the cables can be used to support glass, thus forming a one way cable façade support system.

The more the number of cable elements used to support the glass panes the lower the required prestress for each individual cable.

To control the deflection criterion of this type of façade support, the span/50 rule should be considered adequate under wind loads.

If horizontal cables were added to the vertical ones, effectively producing a cable net, a system capable of spanning two ways is formed. The addition of the horizontal cables makes controlling system deflections easier, assuming an effective spanning distance, resulting in lessened prestress requirements in the cable elements.

Cable truss glass and their developed support systems are remarkably minimal, in that, cables, struts, clamping elements and glass fixing components make up the entire structural system, and are easily the most transparent of the facade structure forms used in contemporary architecture.